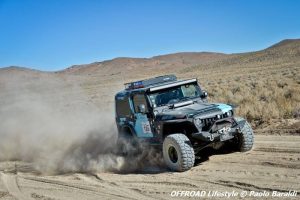 In October 2016, Michelle Davis and her navigator Andrea Shaffer took on the immense challenge of participating in the inaugural Rebelle Rally. The Rebelle is the first all-women’s navigation rally in the United States.

Crossing 1200 miles of the Nevada and California deserts over 7 days, the rally is comprised of point-to-point navigation, requiring precise map and compass skills, off-road, on-road, and desert dune driving prowess, and a spirit of perseverance.

2016 saw 36 teams of women (2 per team) compete in the rally, and despite the odds, they all completed the course.

Early in the rally, Team Sugar High had an accident in the Glamis dunes, launching Sugar High off a dune and “making it into an airplane.” The Jeep actually survived quite well, but did suffer a bent front axle tube, requiring initial straightening, and eventual replacement.

The work required caused Team Sugar High to miss 2 of the 7 days of competition. 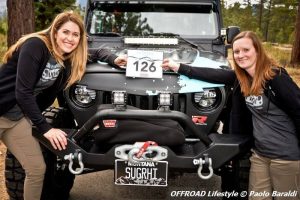 Despite continual mechanical difficulties with the axle, little sleep, and the emotional battle inherent to this type of event, Michelle and Andrea persevered and were able to finish the rally 32nd of 33 teams in the 4×4 class.

The effort and positive attitude displayed by the team did not go unnoticed by the other teams, and they were awarded the Overcoming Adversity award for 2016.

They are already looking forward to participating again in 2017.

For photos and videos of the Rebelle Rally 2016, visit our media page.